It is with great pleasure that I announce the arrival of one of my Kung Fu/Wushu brothers, Zhao Qingjian to American Shaolin Kung Fu. 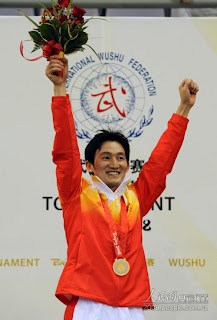 Zhao Qingjian is a Wushu gold medalist winner at the 2009 11th National Games of the People’s Republic of China.  Coming from a family line of martial artists, Zhao began his training in Shaolin under one of his father’s younger Kung Fu brothers.  It was then at the age of 12 where he won his first title of All-Around Champion at the Dongping County Tournament.  After winning a few more tournaments, at 15 he began his rigorous training at the Shaolin Temple taking on the name, Shi Xingjian.


His training at the Shaolin Temple lasted 3 years learning 18 weapons, specializing in dao (staff, 3-section staff and the 9-section whip).  He became part of the Shaolin Temple troupe where he toured in nearly two dozen countries along with Master Feng.


After touring with the Shaolin Temple demo team, he returned to China where he attended college.  During his sophomore year in college, Zhao Qingjian caught the attention of Wu Bin, the head coach of the illustrious Beijing Wushu Team and tutor to international superstar, Jet Li.  Wu Bin immediately drafted Zhao to the Beijing Wushu Team.  Under Wu Bin’s direction, Zhao won an impressive string of medals in both national and international competitions.  The highlight of his career, however, was his participation and achievement of gold medal in Men’s Daoshu & Gunshu combined at the 2008 Beijing Wushu Tournament.


Zhao Qingjian will be at American Shaolin Kung Fu on Thursday July 26th observing and mentoring our students in preparation of this weekend's Legends of Kung Fu Tournament.  Both First and Second Master Feng kindly ask that you show proper respect and hospitality to our guest during his stay at our school.  Please wear your proper uniform and come focused and prepared for your training.  This will definitely be an exciting day for all.
Posted by American Shaolin Kung Fu at 8:55 PM